Published by Quinten Steenhuis on November 1, 2016

If you are using many SharePoint lists and want to connect them to Outlook automatically for your users, you have probably noticed that the official tools for this are lacking. We don’t get nearly the simplicity of Exchange Public Folders without a lot of work, from the difficulty in just getting the SharePoint URLs in the format Outlook requires, to deploying those lists with the limited Group Policy options Microsoft provides. This situation isn’t really acceptable once you get above 10-20 lists, so I spent some time putting together some tools in Powershell that make this process a little less painful. The full set of scripts can be found here.

For many years, Microsoft has offered SharePoint as the path to migrate away from Exchange Public Folders. Despite this positioning, Microsoft offers just one tool to help with connecting those lists to Outlook like the Public Folders you’re replacing : the Office 2013 Group Policy Administrative Templates. That tool has some serious limits.
Here’s what connecting your newly migrated lists to Outlook looks like, the manual way:
In addition to the obvious, time consuming nature of this approach, an additional limit: only one Group Policy will apply the Default SharePoint Lists setting for each user. This means you can’t have a multiple levels of SharePoint lists, where some lists are deployed to everyone while each department gets its own, more specific set.

I solved each of the problems above with PowerShell.

Generating an STSSyncURL with PowerShell from a SharePoint Online Site

My script will return a list of properly formatted stsscync objects URLs, given the URL to a SharePoint or SharePoint Online site. It goes one level+1 deep (i.e., it will return lists for the URL and the child subsites of that URL, but not “grandchildren”).

As far as my research turned up, the STSSync URI is not available with built-in SharePoint Powershell methods. It is well documented, but it uses a proprietary encoding.

Here’s what goes into the URI:

The URI needs to be encoded with a strict version of Base64 encoding, and then additional characters need to be escaped with a vertical pipe “|”: “&”, “”, “[“, “]”, or “|”.
I solved this by calling the method [Microsoft.Sharepoint.Utilities.Spencode]::Urlencode(), and separately escaping those special characters. Unfortunately, that introduces a requirement of running the script on a SharePoint server (SharePoint Online Powershell module is not enough). I also made use of Gary Lapointe’s Lambda function implementation to simplify using the SharePoint CSOM model to work with SharePoint Online.

Although the STSSync URL needs a Outlook content type that maps to a SharePoint list type, SharePoint doesn’t appear to expose this mapping externally. The best way that I identified is to check the Views associated with the list and look for the view titles associated with each type of list.

Here’s the code to generate STSSYNC URLs from a SharePoint Online site (a little too long to embed).

Once we have our nicely formatted URLs, Powershell can also help us turn them into GPOs. As of Server 2012 R2, the cmdlets for manipulation GPOs in Powershell are limited to just setting values in the registry, but that’s enough to get our job done. As a bonus, GPOs that set registry values can coexist, allowing us to set up a “master” GPO with our shared lists, and not have it overwritten by a more specific GPO.

The stssyncurl script linked above outputs objects with three properties: “siteName”,”listName”,”stssyncurl”, suitable for piping to export-CSV. I created a second script that relies on those 3 properties, plus two more: gpoName and OU. To add those two values, I exported the output of the script to a CSV, added the two columns, and used Excel’s autofill to add in the appropriate GPO names and OUs. The GPO will only be created once. For subsequent rows in the CSV, the existing GPO will be updated.

Quick way to get the distinguishednames for your OUs:

Great! Now when your users next close and reopen Outlook, they’ll see those SharePoint lists.

As I mentioned above, not only did I have to add these SharePoint lists to Outlook, because we were migrating, I also wanted to remove the old lists for my users. As nice and “simple” as it is to add a SharePoint list to Outlook with Group Policy, unfortunately r
emoving the same list isn’t as easy.
I looked at several methods, but the most reliable seems to deploy a script on each machine that connects with Outlook MAPI and deletes the lists that I specified.
It’s a short script and the Outlook MAPI namespace is pretty simple. It will only work if the user is logged in. I deployed my script with System Center Configuration Manager as an application, but you could also set this up as a login script. I noticed that if Outlook was already open, it appeared to take a few runs to clean up all of the lists I had specified.
Categories: Group PolicyOffice 365PowershellSharePoint 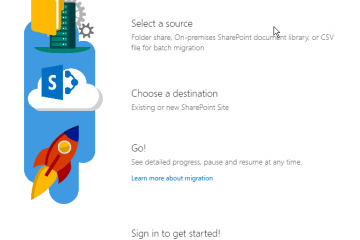